Tiivistelmä tutkimuksesta:
"Limited data exist on ecology of European hedgehog (Erinaceus europaeus) at the northern edge of the species' range. In our study, spatial analysis using radio-tracking data from Finland showed that sex and season had significant effects on the homerange size of hedgehogs. Although males were heavier than females, body weight had no effect on home-range size. Total home ranges (male 98, female 55 ha) were larger than those in southern areas. Thus, male home ranges were larger than those of females during the mating (male 72, female 21 ha) and post-mating seasons (male 48, female 20 ha), but the differences were small and reversed before hibernation (male 17, female 29 ha). Home ranges of individuals of both sexes overlapped, but females shared core areas with other females only during the mating season. Our results imply possible differences in hedgehog ecology probably due to a less productive and harsh northern habitat." 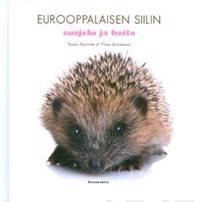 The European hedgehog (Erinaceus europaeus) is the hedgehog species found in Europe, from Iberia and Italy northwards into Scandinavia. It is a well-known species, and a favourite among the wild animals in Finland. It is thought to be declining severely in
Great Britain and the similar vanishing among species is seen in Finland too. Some urgent survey to calculate the species should take place in near future. It’s usually welcomed to our gardens but not always known for eating a range of garden
pests. There are also other less known features of this cute spiky ball. This website offers the latest survey on the European hedgehog to take care of one of our dearest mammals.
Käyntejä kotisivuilla:1012124 kpl